The reason to make a new purse..............Racoons!  My purse didn't survive the attack of the Tim Horton's drinking Raccoon. 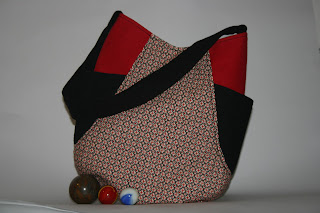 This is what my purse looked like before the run in. I had used Noodlehead 241 tote pattern  I really like this purse as I could fit everything in it. As well I liked the fabric I used for it.

How the purse had the run in you ask.  Well when you go camping we all know that you must not leave food laying around your camp site other wise you will have animal visiting. Where we were you have chipmunks, skunks and raccoons.

So we packed up all the food for the night and locked it in our SUV for safe keeping.......or so I thought. I heard the raccoons fighting outside of the tent around 3:00 in the morning.  Then I heard what I though was our dishes and coolers moving around.  DH went to check by walking around the SUV with his flashlight looking around on the ground no raccoons there so, he headed off the the Washroom.  While he was gone I heard them again, he came back climbed in the tent. I told him, he said it was fine. Once they started up again I sent him out again,  this time he looked up higher and saw a racoon on the passenger seat of the SUV. He then realized that the driver side window was down all the way.

He had me come out to help, send me to the passenger side.  I wasn't going to open the door till I saw what I was dealing with.  Flashlight to the passenger side yep that's a big guy, then lets see if there are any more.  One sitting on the booster seat in the middle of the van and three in the back.  Great the whole family.  I opened the front door to get the big guy out, he got out after a little while but the other ones aren't moving.  DH had opened up the hatch but they weren't in a hurry to leave their food behind.  So I figured if you slam the front door that will get them moving.  The problem with the plan was I never told DH so he heads for the hatch at the same time the rest of the raccoons are rushing the hatch to get out. He jumps and yells and they stop.  So now it's time for me to start throwing things, one well thrown water bottle square of the butt of one of them gets them moving. 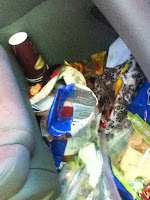 They didn't get into the coolers, but the Butter tart squares were fair game, Marshmallows, Jube Jubes, and all the other candy and chips we had for the trip. Other food was in open boxes so they sat on them as well as our potatoes and left some presents so that had to go as well. The biggest mess was on my purse. The raccoon had knocked over the last of the Tim Horton tea. It still had the bag in it as well. So between the tea the food mess and the mess of the raccoon there was no help for my purse.

So I cleaned out all the stuff and threw out the purse. I spent the rest of the week without a purse. I have started using one that I made before since I got home. I don't mind it but I really need to make something else up.  So I will have to look around the fabric stashes I have as well as the patterns and figure out something. 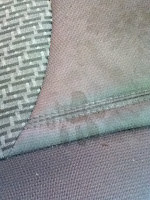 I do need to take the SUV to  car detailing to get rid of the tea foot print.


We really did have a great time camping and have been laughing about the raccoons.  It could have been worse, at least it wasn't the skunks.
Posted by Carry Hers By Natalie at Thursday, August 30, 2012

It was such a nice purse too:( We get the pests after our garden specially the tomatoes. Great story even if it had an unhappy ending.

Great purse. I've been thinking of making this pattern myself.

Thanks Mary Ann, I laugh about it now. I guess I'm so use to camping with racoons around. I don't have problems with them in my gardens, it's the squirrels and chipmunks the take out my garden. I gave up on tomatoes as they would take bites out of them.

Hi Lisaleh, Thanks I love Noodlehead patterns. I was toying with the idea of making another one just like it. But maybe I will try one that has more pockets on it so I can be a bit more organized. I was always losing my keys and phone in it.

Wow - that is quite an adventure! I love your new purse - I guess the raccoons did serve a purpose: to get you a new purse? Maybe? :)

That is quite the adventure , not one I would want to share but interesting all the same,I can see you do indeed need a new purse :-)

Just having a good chuckle over your raccoons! It will be a great story for a long time! (And you get to make a new purse!)

Hi, it was an Adventure, and I do laugh over it still. It was a good reason to get a new purse.

They way I look at it they liked the van too much to come visit us in the tent. They could be heard at the tent opening, but never came in. Most likely my DH's snoring scared them away. Lol

Yes it is a good story to laugh at for a long time. I try my best not to bug DH about leaving the window down. I did miss the butter tarts as well as the purse.

I'm really sorry to hear about your purse -- it was beautiful -- and your food! That is quite an adventure though and is an awesome camping story to share! :)

That really was a nice purse and the stuff memories are made of! ;^)

Thanks, my son has been busy telling the story at school. It is part of his writing journal this month. I'm glad all my family can laugh about it.

Yes it is a great memory for our family. We are still laughing about it.

Carry Hers By Natalie
Hi I'm Natalie. I'm married and Mom to two cuties. I enjoy making Purses, Bags, and Totes. I use patterns that interest me. I also make up many designs of my own as well. The best way by just sitting down and sewing.